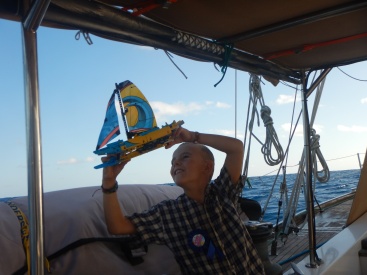 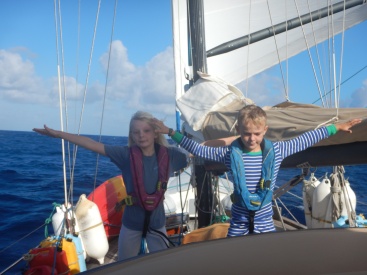 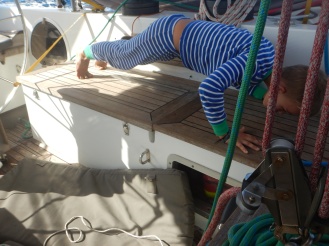 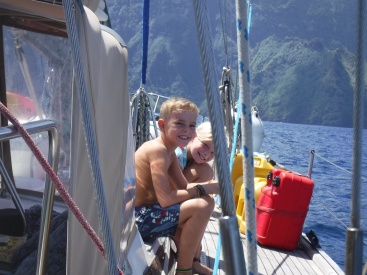 Our 3 happy weeks in the Galapagos flew by. The islands we visited gave us very different perspectives of the unusual archipelago. It is a shame for us as impoverished cruisers that much of the amazing coastline on the spectacular islands is only accessible via a paid tour on a registered tour boat, so you fell like you are getting a very censored view of what the islands have to offer. I’m sure this is necessary to keep the islands fragile ecology intact, but selfishly, we would have loved to have seen more.

Puerto Ayora, as the largest town in the islands, was a great provisioning spot. Despite rumours of outrageous prices, we found a very large and well stocked farmer’s market that opened at dawn, selling fantastic fruit, meat, eggs, etc. There was also a decent and reasonable supermarket on the quay for all the essentials, and some none essential but very exciting salami, cheese and treats for the kids to open on the crossing.

Having had to wait for the right weather window, and enjoyed the coffee shops and restaurants, for a few days, we had a small fleet of boats ready to go on the same day, finding a gap in the dominant STCZ / Doldrums that moves up and down depending on the surrounding weather patterns, allowing us a shorter path to the trade winds to our south. We were lucky. We set off into a light breeze and had an afternoon under asymmetric to power us away from the islands, followed by 24 hrs motor-sailing SW to find the breeze. Light winds, showers and squalls dominated for the first few days, with a rolly sea making the crew feel a little green and subdued. The motor was on and off, and the spinnaker up and down multiple times as we rocked west. The clew ripped on the asymmetric, so a day repairing that (spinnaker tape, gorilla tape, and a lot of suspect sewing) kept the resident seamstress busy leading us to the momentous 7th April.

The crew were all up at 5 am to celebrate Fin’s 8th birthday. We also hit the halfway point of the passage as Fin completed the Lego Open 60 – an inspired birthday present from Aunt Lot – before midday. The preordered menu of pancakes, Mum’s coleslaw and noodle salad and pizza for supper, as well as Stella’s sumptuous chocolate cake, kept everyone happy and was a welcome break from the routine.

Trying to find a comfortable rig plan and point of sail kept us busy, eventually settling on a poled out genoa, no mainsail and full mizzen to keep the boat going at 150 miles a day, rolling, but minimising the crashing and banging that can make downwind sailing very wearing on both boat and crew. We were kept entertained by our communications with the “M-Fleet”, organised by our friends on Panache, giving us regular updates of the boats travelling the same way as us. The catamarans were suited to the wind direction, and details of Counting Stars doing 200 mile days, and Panache having drinks on the front porch and 3 course meals were a stark contrast to our rolling 150 mile days, but we were heading west and happy to be eating away at the last remaining 1000 of our 3000 miles.

Day 12 saw some fish on the line, as we caught a beautiful mahi mahi, only to lose it 10 metres off the back of the boat as we were reeling it in. This was quickly replaced by a large skipjack tuna, which after battling for about half an hour left the cockpit like a scene from Reservoir Dogs, and dominated our dinner table for many days. It ended up lasting 5 days, and appeared raw, pan fried, Moroccan style, curried and in tacos among other things.

The wind angle kept encouraging us to try one of the spinnakers, and the sight of over 9 kts on the speedo kept us flying the symmetric one a bit too long! A big bang announced the departure of the majority of the sail straight under the boat, leaving the head of the sail fluttering in the breeze at the top of the mast. Luckily nothing snagged under the boat, and we could pull it back onto the boat fairly easily, although it did put an end to our spinnaker antics for this passage. This stronger wind held for a couple of days, eventually petering out within 150 miles of the Marquesas. With all the fresh supplies gone, and the rolling wearing us all out, the engine went on and stayed on, pushing around the dramatic south end of Fatu Hiva, bristling with the smells and colours of fertile land that we hadn’t seen since Panama, and into the spectacular Baie de Vierges, a well earned sight for a very excited crew, having put another 3000 miles under our keel in under 3 weeks. 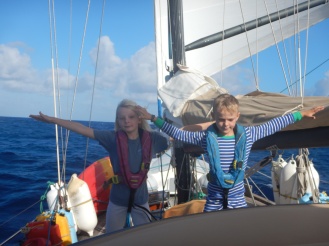 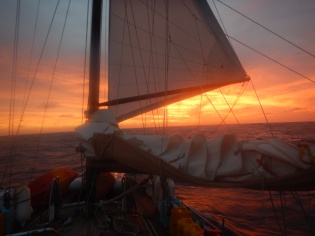 3 thoughts on “Galapagos to Marquesas – The BIG hop”