It’s difficult not to hear David Attenborough’s voice echoing in your head as you explore the Galapagos – it really does feel like you are in the middle of a nature documentary – the animals are definitely the stars of these islands! Cheeky sea lions swim right by you, you have to step over the lazy marine iguanas sunning themselves on the paths and the boobies do actually have blue feet. It’s a bit like a living breathing and very so slightly surreal cage-less zoo.

The Galapagos Islands are a small archipelago of islands belonging to Ecuador in the western Pacific Ocean. The islands are quite remote and isolated, lying some 620 miles (1000 km) west of the South American continent. The archipelago consists of 13 main islands and 6 smaller isles, which together embrace some 19,500 sq miles (50,000 sq km) of ocean. A perfect stop for us on our way across the Pacific to French Polynesia.

The islands were claimed by newly independent Ecuador in 1832, a mere three years before Darwin’s visit on the Beagle. During the 19th and early 20th centuries they were inhabited by very few settlers and were used as a penal colony, the last closing in 1959 when the islands were declared a national park. The Galapagos were subsequently listed as a World Heritage Site in 1978.

The Galapagos is world-renowned for its unique and fearless wildlife – much of which was inspiration for Charles Darwin’s Theory of Natural Selection. These islands are home to some of the highest levels of endemism (species found nowhere else on earth) anywhere on the planet. About 80% of the land birds, 97% of the reptiles and land mammals, 20% of the marine species and more than 30% of the plants are endemic.

Galapagos has a permanent population of around 30,000 and is visited by over 200,000 people annually. Understandably strict controls on tourist access are maintained in an effort to protect the natural habitats and so organising a visit to these islands on a sailboat takes preparation, patience and a rather large amount of jumping through hoops! Many emails, a few phones calls, a couple of tears, a lot of cleaning, hull scrubbing, garbage sorting, finger crossing and coca cola/brownie bribing later; the large gang of health inspectors, national park rangers, immigration officers, fumigators and agents departed Blue Zulu and we were thankfully checked into the Galapagos.

Our first island was San Cristobal and true to form our first greeting (beside the friendly water taxi guys) was a bark from a huge sea lion dominating the gangway from the pontoon to the jetty – you basically have to navigate your way around the sea lions who totally rule the rather charming main town. We loved watching the baby sea lions near the main town quay feed from their mothers or cheekily play chase in the water. All the cruisers use the local water taxis rather than their own dinghies as the sea lions make their beds anywhere and everywhere – dinghies, fishing barges, local parks, low transoms, benches and especially on the sugar-scoops of the catamarans at anchor.

We were lucky as we had Patrick’s sister Lot with us, who not only had visited the Galapagos a few years previously and knew all the good spots but also has an encyclopaedic knowledge of all the flora and fauna – basically our own special tour guide! We had a very chilled few days exploring the area around the town of Baquerizo Moreno. We walked to nearby beaches to snorkel with the amazing marine life or sunbathe next to a sea lion. Our favourite was a walk via the fascinating interpretation centre to Las Tijeretas where we snorkelled in this stunning little cove, sharing the water with brightly coloured fish, sea lions, turtles and marine iguanas.

Through Lot’s connection with the UK based charity, The Galapagos Conservation Trust, we spent a morning with some local kids who were learning all about the problem of plastic and the importance of protecting their precious islands for the future. We made little dolls out of plastic bottle tops and sang Spanish songs – it was fun to see our little group of English speaking boat kids interact with the group.

We also visited a local ‘Swiss Family Robinson-esque’ treehouse, designed and build around a gigantic Kapok tree, where the kids enjoyed climbing ropes, slack-lining, exploring and planning their future life as owners of the tree house! 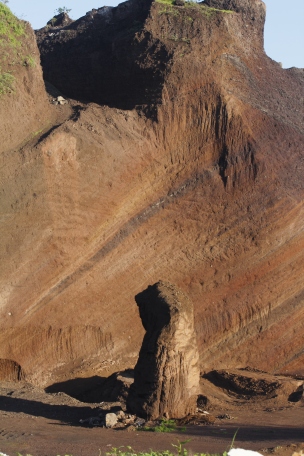 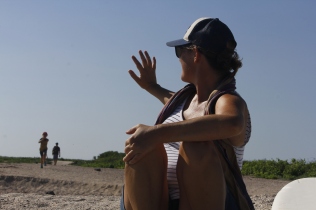 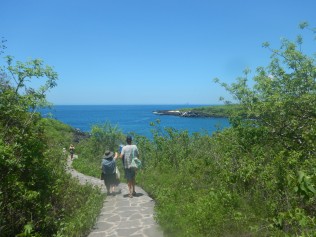 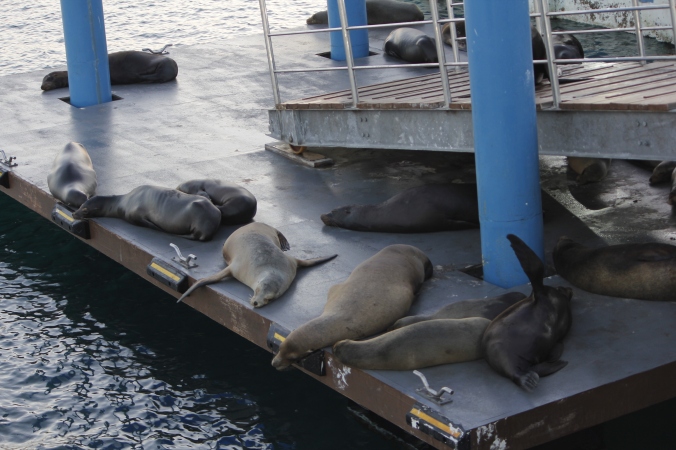 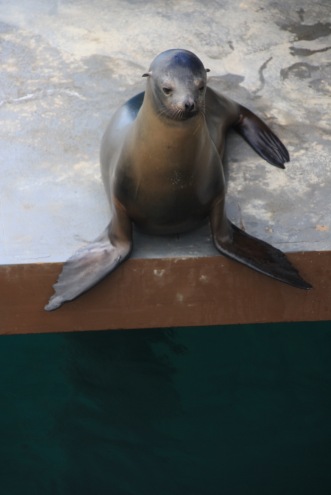 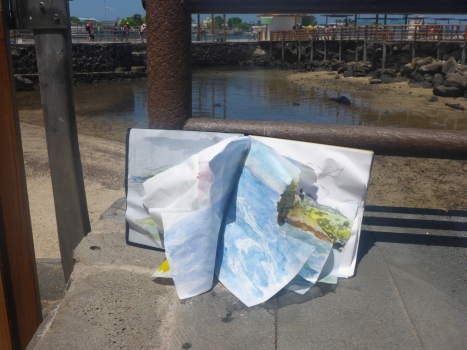 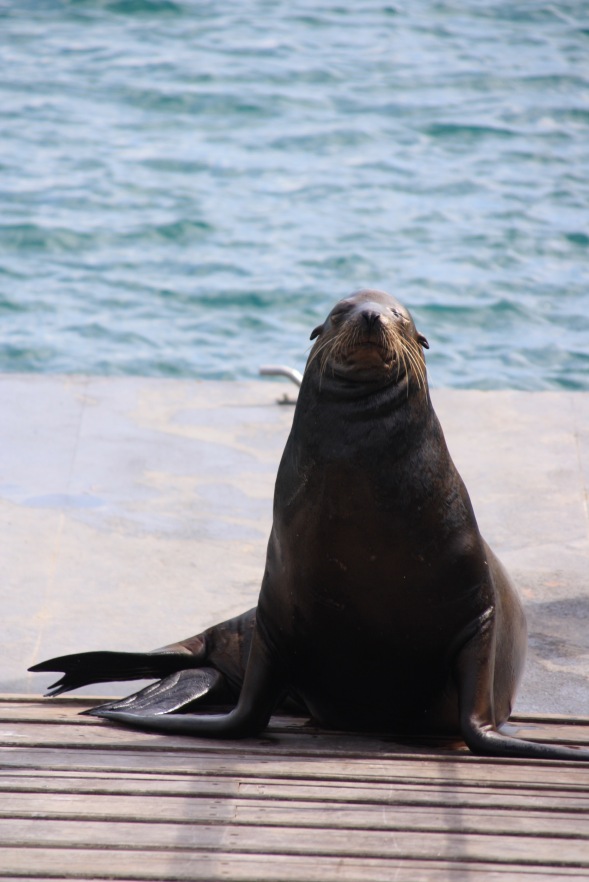 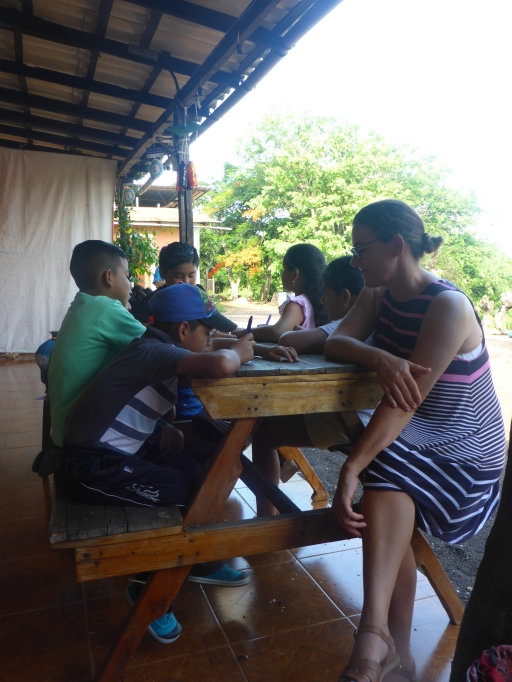 Our next island was the wonderfully laid back Isabela. We lucked upon arriving during one of the island’s biggest annual fiestas celebrating their founder, Tomas de Berlanga. So we jumped into a taxi and went off to a tiny little village in the ‘highlands’ to join in the fun. The event was a surreal and entertaining mix of school fete, rodeo and village festival. Almost the only tourists there, we arrived during the volleyball tournament – a game which is taken very seriously throughout the Galapagos. Once the volleyball was over, we watched intrigued as a tiny table and two chairs where bought onto the ‘stage’. It soon became obvious that a rather serious beer drinking competition was about to take place! Next thing we knew the MC had called the ‘Tall Gringo’ up to take part and Patrick was joining in the mayhem. The locals were no match for P’s ‘four years at university’ training and he walked away victorious to raucous applause and six beer quarts as his prize! Feeling more part of the celebrations and encouraged to join in by our new friends, Stella became part of the winning girl’s tug of war team while Lot and I helped bring victory to the woman’s team. We watched amazing egg throwing competitions and sack races, ate empanadas and caramel covered fried bread, drank our quarts and smiled with the locals. As darkness fell and feeling we’d had enough of the local horse rodeo, we jumped in the back of an open ‘tourist truck’ for a lift back to the harbour.

We totally fell for the relaxed charm of Isabela’s main town, Puerto Villamil and spend time exploring the sandy streets, drinking from fresh coconuts and eating delicious fish empanadas. We hired bikes and cycled through the national reserve to see the giant tortoises, bright pink flamingos and pretty red Sally Lightfoot crabs. We visited the Wall of Tears (El Muro de las Lágrimas), a historical stone wall build by prisoners of the penal colony between 1945 and 1959 and which claimed many lives. Locals call it the Wall of Tears because it is said to emanate eerie cries and have a heavy energy surrounding it. It certainly was a spooky yet oddly emotional place. We also loved swimming in the waves at the gorgeous beach and even managed a little surfing! But the highlight of Isabela was our tour to Los Tuneles.

The Galapagos offers endless tours but we could only afford to do one so we chose very carefully and fortunately wisely. We joined our friends from Counting Stars on an exhilarating boat trip to explore and snorkel the crystal clear underwater lava tunnels of Cabo Rosa. Fin was totally delighted at the 300 hp engines on the back of the speedboat! We survived the fast and bumpy speedboat trip, hair-raising entry through the large swell and were the first boat to arrive, happy to have the place to ourselves for a while. We swam through tunnels and into underwater caves, explored the inhospitable rocky shoreline and learnt all about this unique part of the world from our informative guide. We got up close and personal with a seahorse, sting ray, blue footed boobies, black and white tip sharks, sea lions, huge turtles and countless colourful fish – a wonderful, exciting, magical day. 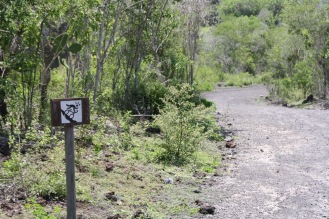 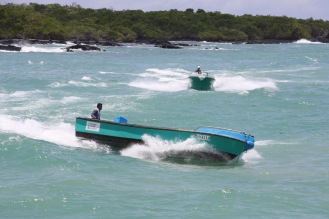 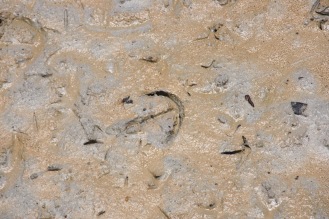 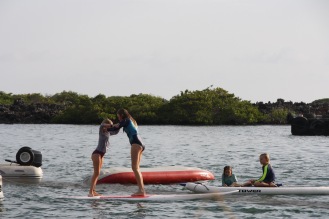 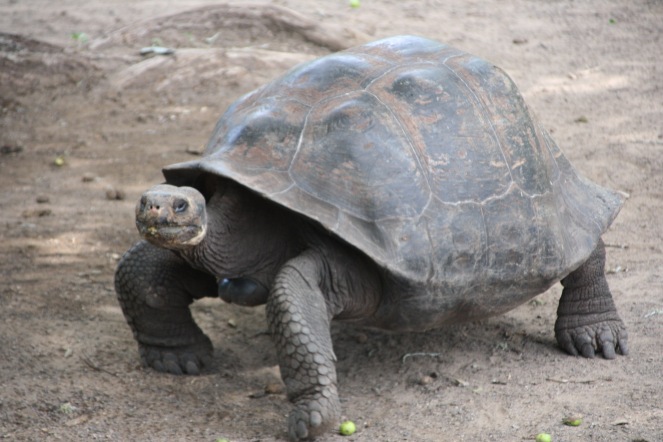 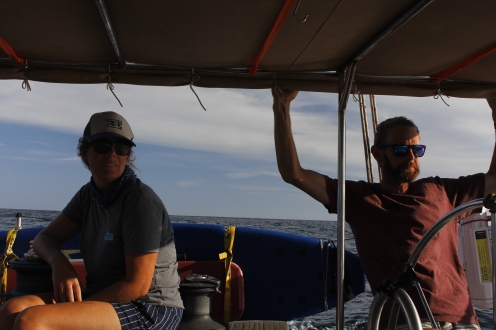 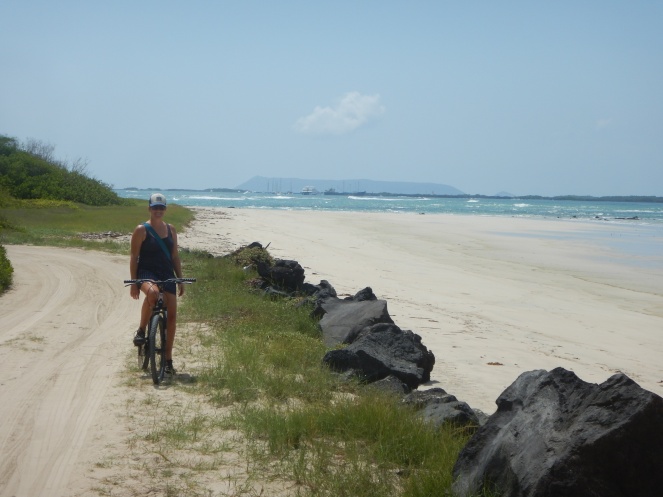 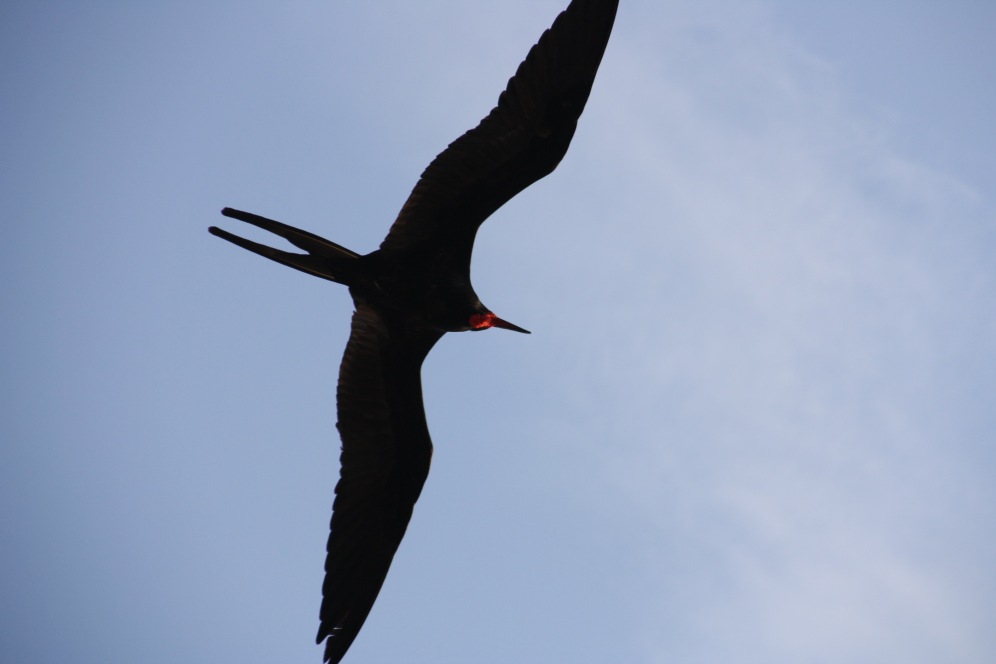 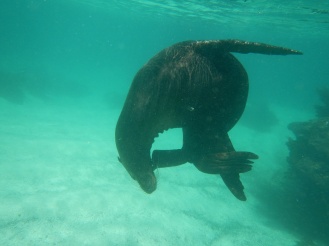 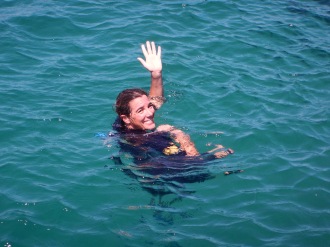 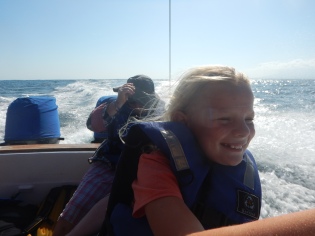 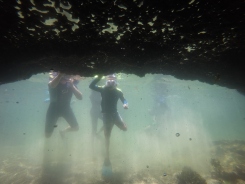 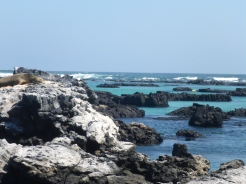 Our final island was Santa Cruz. We had a wonderful sail between Isabela and Santa Cruz and were lucky enough to hook a gorgeous and extremely delicious yellow fin tuna which fed us for the next three days! We found Santa Cruz’s main town, Puerto Ayora, to be the most cosmopolitan and ‘trendy’ of the three we visited. It was stuffed full of shops, restaurants, coffee shops and was the perfect spot to restock for our next big passage. We completely overindulged and ate out far too often; Patrick and I even managing a very rare ‘date’ night while Lot generously looked after Stella and Fin. We didn’t venture too far from the town but there was still plenty to do – we explored the wonderful Darwin Research Centre, swam in the freezing canyon Las Grietas, surfed at the stunning Bahia Tortuga and even found time for Isla’s birthday party and a local art competition hosted by the World Wildlife Fund to celebrate World Hour. 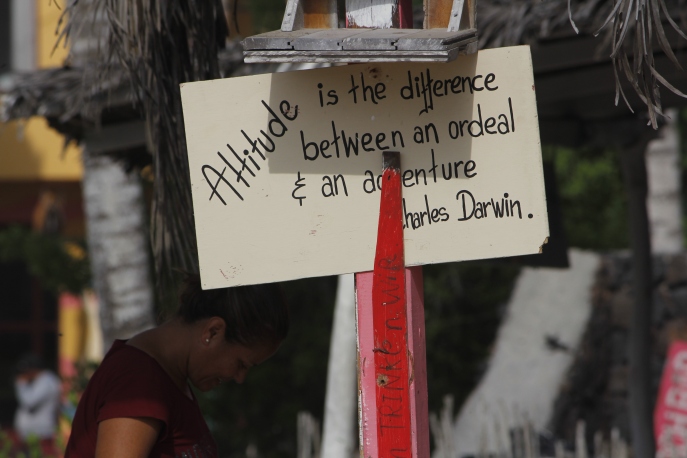 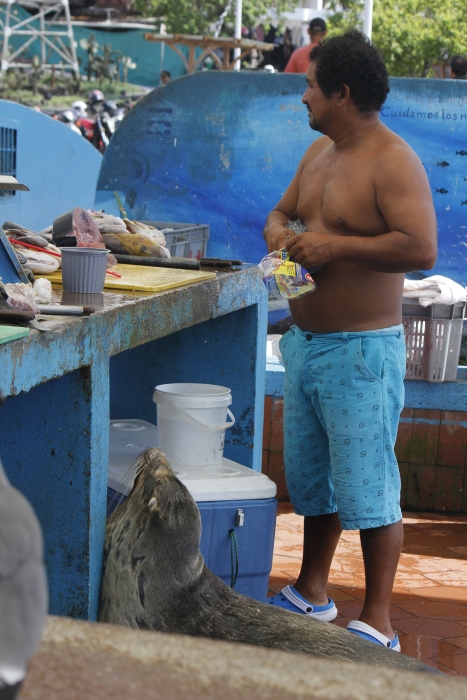 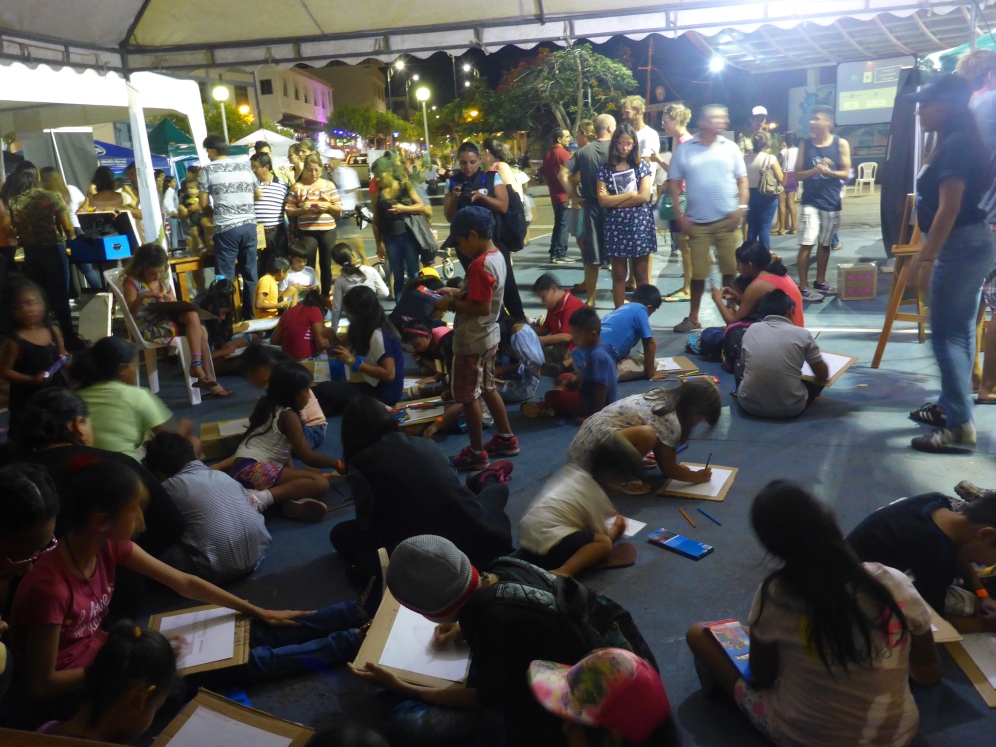 We had the honour of being part of an exciting project with Falmouth University students and the Galapagos Conservation Trust. The Marine and Natural History Photography students are making a film for the Trust on the plastic problem and the importance of conserving and protecting the unique wildlife of the Galapagos. A group of lovely students and their lecturer braved the very rolly anchorage of Santa Cruz and came onboard and filmed us on Blue Zulu. Stella and Fin were the perfect excitable hosts and we valued being able to hear about the student’s time in the Galapagos and share our experiences of sailing in this part of the world. Their film will be shown at Galapagos Day in London in October – I wonder if we’ll make the final cut!

We had a very social time in the Galapagos, as we were lucky enough to share all the anchorages with three other kid boats – Americans on Counting Stars and Anila and a British family on Higgins. Along with exploring these amazing islands and falling in love with the unique wildlife together, the kids did lots of swimming, the parents had sundowner drinks, we enjoyed pot lucks, beach visits and groups trips and we still had to fit in boat school, provisioning and getting Blue Zulu ready for her big trip across the Pacific – busy busy busy! We also had to sadly say goodbye to Lot who was flying back to the UK – oddly she wasn’t tempted by 3 weeks at sea across the Pacific??!

We are extremely fortunate, we regularly visit amazing places – I guess that’s the nature of how we are living our life – but I must say the Galapagos Islands are special. Lying in your bunk at night listening to sea lions blow bubbles and play around your hull, snorkelling with giant turtles, admiring Darwin’s many finches and enjoying the funny mating dance of the blue footed boobies are incredible but I think the true joy of this remote archipelago comes from seeing the local wildlife reign supreme, confident and so at peace in their environment. We are reminded of the beauty and fragility of our earth and of our place and power in it. We are reminded how important it is to each do our little part to keep our planet and all her creatures safe so that all can thrive. So please let’s all try to reduce, recycle, reuse and respect. Thank you. Lecture over.

A large number of the gorgeous photos belong to my Sister-in-law Charlotte – thank you so much for sharing your lovely images with us (and for taking a few of me!)