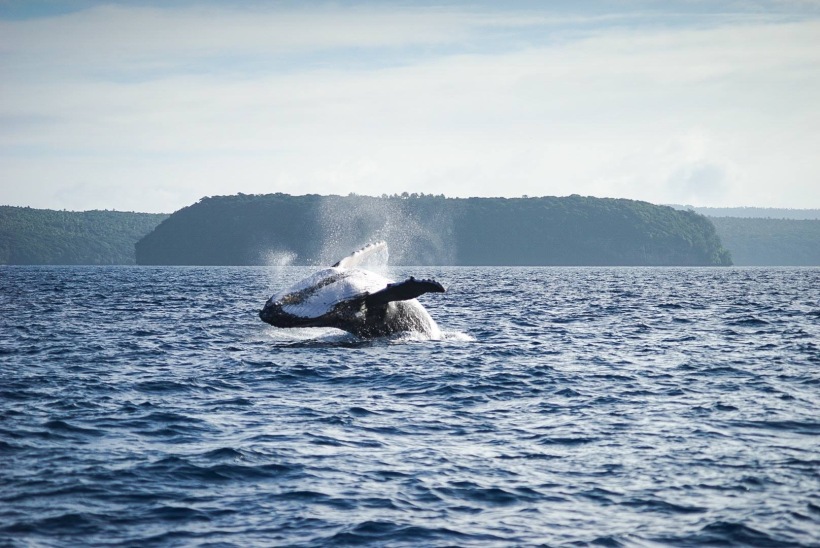 Looking eye to eye with a majestic humpback mother and calf rate right up there as my highlight of Tonga or maybe even the whole Pacific. Each year, humpback whales make the 6,000 km journey from Antarctica to their winter breeding and birthing grounds, including Tonga’s tropical waters. They begin arriving in June, most new calves are born between July and September.

Tonga is one of the few places in the world that tourists can legally swim with these incredible creatures.  It’s a hotly debated practise: is it really something we should be doing? We spent quite a while quizzing friends who went on trips before us – How was it?  Did you feel comfortable with the treatment of the whales?  How were the guides?  Would you recommend it?  But ultimately I’m afraid our curiosity and pure excitement won out over our conservation reservations and we chose the company who had the best reputation and went for it.

We had a magical day!  It started with the treat of rain and I was worried as it’s difficult to spot the whales in the rain as you are reliant on seeing their spray.  However the weather changed and it soon turned into a magnificent day.  We had a fun group, all young cruisers: two American guys who work for Space X and a Canadian couple. We headed out into the archipelago to try and spot whales. It didn’t take long before we were surrounded.  Humpbacks are the most acrobatic of the large whales and are known for their spectacular breaches, tail lobs and pectoral slaps. Individuals can be identified by their unique dorsal fins and tail flukes.

They are also known for their vocalisations called whale song. Probably a means of communication the songs vary from place to place and all humpbacks in one area sing the same song. The song evolves when new whales join the group.

Behaviours include boisterous courtships displays as well as playful moments between mother and calf.  It was a true privilege and pleasure to watch these impressive animals playing, showing off and enjoying themselves and that’s even before we got in the water with them. Always under scrutiny, local whale-watch operators adhere to strict regulations to insure that these mammals will always find a peaceful haven in Tonga.

Only 4 people are allowed in the water at one time with the guide.  So you wait ready at the back of the boat.  The guide jumps in first to make sure that the whales are happy and that it is safe, then he gives the signal to join him.  What follows is a mad dash, trying to avoid jumping on top of anyone else, trying to make sure the kids are ok, trying to spot the whales, trying to film it all and mostly trying not to be maimed by the metal floating ladder at the back of the boat!  It was all so fast and I soon decided to abandon the camera and just embrace the moment.  The mania is such an incredible adrenaline rush anyway and then factor coming eye to eye with a whale and calf into the scenario.  Wow – it was just too much for my brain to take in.  It was humbling, beautiful, frightening, emotional and sacred but it was all over so quickly as the whales moved past us and continued their journey.

We ‘swam’ with the whales, mostly mother and calf but also two males who were escorting the mother (i.e., trying to get lucky next…) about 3-4 times and each session lasted just a few minutes. But on our last swim, we got lucky — they had slowed down and sunk beneath us so after a mad fast swim to keep up with them, we could just float above and watch them beneath us, pure magic!  We are incredibly lucky to have had many amazing experiences over the last few years but sharing the ocean with these awesome animals is one we will never forget.

“This is Stella speaking”:

It is an other worldly experience, swimming with whales.  They are majestic animals, that are wise and huge creatures, I would really like to do this again. A glimpse of the bulking grey body and intelligent eyes are the purest, most magical feeling that I have felt in my life so far. We were lucky to have guides who knew their stuff and were careful when approaching the whales. Some things were not customs that I believe  in, such as getting so close to the whale that you were almost trapping it, but this was necessary to be able to see the amazing wildlife and understand them.

Of the Humpback Whale.

Wonderful film by our friends from SY Sitka of our incredible day with the whales.

Waves ripple as the whales jump

Holding my breath when I drive down

A mother and her calf

Looking me in the eye

One thought on ““So Amazing!” – So Grateful”