“Waiting for weather” up until 2 years ago meant having one more drink while the rain passed and it was safe to leave the pub. Since then, weeks have passed as we have waited for weather systems to materialise or dissipate, depending on where we need to get to, and when we needed to get there. Occasionally we have tried to beat the system – usually we lose!

Having checked out of Raiatea after we dropped off the Waller Family, we headed to Bora Bora again where there were a few more things to keep us occupied while we waited for the perfect weather window. Our next series of passages to Tonga involved slightly more complicated planning, because in this area a number of factors have earned it the nickname “The Difficult Middle”.  An area of unsettled weather called the South Pacific Convergence Zone (SPCZ) hangs around giving generally calm weather with a sprinkling of squally winds, thunderstorms and rain, while at the same time frontal systems roll past from west to east, bringing stronger winds and westerlies. What we were looking for was a period of steady easterly trades. Our target landfalls across this area were the two small islands of Palmerston and Niue, which had anchorages only sheltered from winds from the East.  So we needed Easterly winds for sailing, and Easterly winds when we were stopped, we had about a three week period to get to Tonga at the West side of this area, and the fronts came through with their Westerly winds roughly once a week. Hmmmm.

Following the sage advice of various weather gurus whose weekly updates we were seeing, as well as the various local “experts” more than willing to share their opinions, “at the moment the window is closed but looks good next week”, or, “you should have gone last week”, or, “the week after next is probably perfect”….

…so we just left.

Bora Bora disappeared over the horizon behind us as the sun set on an early August day from a perfect blue sky, and steady easterlies blew us in the right direction at 7 knots. Our first day saw 170 miles under the keel, but by sunset on the next day the wind was gone. We motored for 24 hrs and the wind started to return from the West. By midnight we were sailing on the wind, with 3 reefs in the mizzen, no main, and a scrap of the genoa out. Our wind instruments were not working, but we estimated 30+ kts, with gusts of 40+ (this was confirmed by friends we met later who had been nearby).  In the middle of this, the watchman was in the cockpit feeling soggy and sorry for himself when he was suddenly attacked by a large inflatable yellow monster – with a whoosh the monster threw itself around his neck and tried to strangle him! In the darkness a loud alarm woke and terrified Anna below, as the MOB (man overboard) alarm attached to my lifejacket activated the alarm on the VHF. An incoming wave had triggered the auto-inflate in my lifejacket, activating the DSC alarm, ensuring not much sleep for either of us that night.

The heavy winds calmed down the next day but stayed from the West, with squalls changing the wind direction up to 90 degrees instantly, so as darkness fell the next evening we put the motor on to keep us heading in vaguely the right direction. We had shipped a lot of water into the cockpit the night before, and unbeknown to us a drip through one of the latches in the cockpit floor had been dripping directly into the alternator. Clouds of smoke and a burning electrical smell pouring out of the engine room about 20 minutes after we had started the engine, got pulses racing again, and we shut it down. Further investigation showed a totally seized alternator, but with the sea still lumpy and enough wind to keep us going, we decided a good night’s sleep was required before pulling the engine to pieces in the daylight.

The next morning, with the winds steady from the South-West and dropping, we removed the alternator (no spare on board) and managed to free it up with a dose of brute force and ignorance, and we got it back on spinning freely so the engine could run, but not charge the battery. Luckily the sun came out for the first time in a while so the solar could keep the batteries charged during the day (the generator had died months ago) and as the wind died completely through the next night the engine went on again, running through the next day to get us to Palmerston Island just before sunset. The only problem was, that as the sun went down the solar power stopped working. Our autopilot was manufactured in the late 70’s, before the boat was built, so although it works brilliantly it is powered by a large electric motor than needs about 20 amps coming in to keep it going. Without an alternator it just isn’t possible to use it so we had to hand-steer through the night, which meant keeping someone on the wheel for the last 24 hrs to Palmerston Island.

As we approached Palmerston, we were welcomed by a pair of humpback whales breaching off the top of the Island. We motored down the West side into the calm water just as the sun was setting, and our second welcome was from Bob, the owner of some of the moorings, and as the first one out to greet us, he became our “host” for our stay on Palmerston. He arrived in the twilight to guide us in, just as we were questioning whether we should head back offshore and wait for daylight to be able to safely pick up a mooring without hitting the nearby reef.

The next morning brought a sunny day and a collection of Palmerston’s officials in Bob’s fishing boat. Everyone came aboard and the usual Pacific confusion ensued, with another different checking in procedure for another island. The charming Arthur checked us in, and introduced us to the social and political structure of Palmerston, including helping to guide us through our next sticky situation….

Palmerston was uninhabited until 1863, when Englishman William Marsters, who had been travelling around the South Pacific looking for an island to settle on, arrived with his three wives.  He brought plants to grow, and successfully installed himself and his quickly expanding family. With help from the wreck of the Thistle, a Scottish freighter carrying a cargo of timber, he built a community of homes, a church, store and workshop. By the time he died he had had 21 children and the island was divided into three sections, one for each of his families from the three wives. These dividing lines still exist today, and as soon as you start talking to the current population you realise that this tiny island of around 60 inhabitants is still 3 separate communities. We hadn’t realised about these divisions, and in our naivety we had emailed the local policeman before we arrived and asked if it would be helpful to bring anything from French Polynesia. Having loaded our cargo for this infrequently visited community, it transpired that if you were bringing something for one family, the other two also wanted the same. The problem was, the policeman wasn’t from the same section of the island as our very “attentive” host, so with much cloak and dagger conversations behind trees, and pre-dawn visits to Blue Zulu from the policeman the transaction was completed, but we won’t be doing that favour again!

Bob and his family were fantastic hosts, feeding us great feasts of parrot fish and chicken, and regaling us with tales of fish caught and local politics. His kids gave us a tour of the island and their school. We visited Bill in the next section, and were treated to cups of tea and crisps, as well as seeing his turtle breeding program, with buckets full of baby turtles. The island was quieter than usual as the majority of the population were in Rarotonga for the Cook Islands annual carnival, but in the 2 days we were there, we got a great insight into this beautiful, crazy and friendly community; the true definition of being in the middle of nowhere.

As the next front approached and forecast showed the wind moving to the West again we needed to leave the anchorage which was along the side of a very hard looking reef. Inspecting the mooring line during a snorkel the morning of our departure, we saw that it was definitely not a mooring you wanted to rely on when the reef became a lee shore! After one more feast with Bob, we again departed into the blue with clear skies and a lovely North-Easterly pushing us onwards….

By midnight, as predicted, the wind had backed round to the West and the squalls arrived again, albeit less violent than on our previous passage. A nasty short chop made progress very slow, as Blue Zulu stalled on the waves. We bore away to keep going and soon found ourselves steering due South. It appeared that tacking would see us heading in a better direction, so we went about only to find our new course over the ground was 340. Not sure tacking through 160 degrees rates as a good angle on the wind!

As the wind dropped the next evening it veered more and we were heading North. By the next morning the motor was on, and the sea still lumpy. On cue, to add some spice to our life the engine cut out. With excessive rolling we had picked up either air or dirt in the fuel. Some more time in the engine room saw the fuel filters replaced and the fuel lines bled, so we could motor on and off as the wind shifted and continued to drop. This was all going on while we still had to hand-steer the boat….

Two days of this got us 200 miles closer to our destination, and at 07:30 on the morning of 15 August we picked up our mooring in the rain, happily in the lee of our next adventure, the Island of Niue.

If variety is the spice of life, then the Dangerous Middle is a Scotch Bonnet! 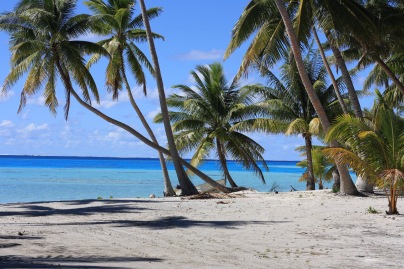 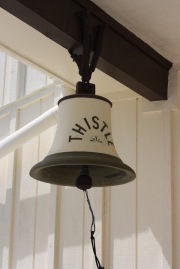 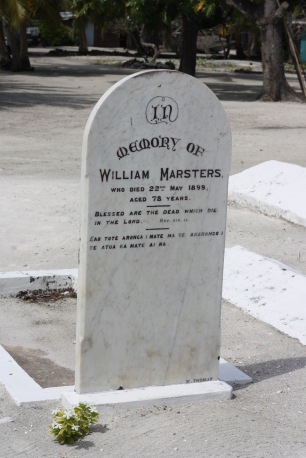 2 thoughts on “Across the “Difficult Middle””