One of the world’s greatest shortcuts may have bought us to Panama but we were delighted with what we found. We fell in love with the magical San Blas Islands, enjoyed exploring the rich jungles around Colon, the ancient Spanish forts at Portobelo, the stunning empty beaches of the Islas Las Perlas and the bustling metropolitan capital city filled with shiny skyscrapers.

Before we left Blue Zulu safely tied up in a marina in Linton Bay for a flying visit back to the UK and SA to satisfy grandparental longings, we explored a little bit more of the wet Caribbean coast. We initially visited the nearby town of Portobelo in search of much needed replenishment of cash, gas and food! But unfortunately the ‘promised’ ATM no longer existed (rumour has it that it had been pulled out of the wall and stolen too many times for the bank to continue to replace it!), the local supermarket was rather sparse and there didn’t seem to be any gas distributors in town. Fortunately we managed to get a few basic food stuffs at the local Chinese shop using our credit card and we found a local guy who filled our gas bottles himself using a gravity feed from a local bottle. This ensured that we were able to stay a little longer in this atmospheric town.

It is incredible to ponder that this very ramshackle and down at heel town was once the greatest Spanish port in Central America. Mules carried Peruvian gold and Oriental treasures to Panama City via the fortresses at Portobelo. Though English privateers destroyed them several times throughout their history, many of these atmospheric colonial fortresses still stand. Throughout the village, homes are situated among these atmospheric ruins. We explored many of them and had a particularly memorable hike through the jungle during a thunder-storm, stopping to admire the leaf cutter ants while a family of coati ran across in front of us and howler monkeys called from the tree tops. Today Portobelo is protected as a national park and as a Unesco World Heritage Site. It is also the home of the Black Christ who is widely worshipped around Panama. Believers attribute miracles to the 1.5 m statue that was found floating in the bay. 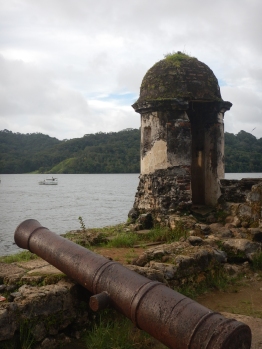 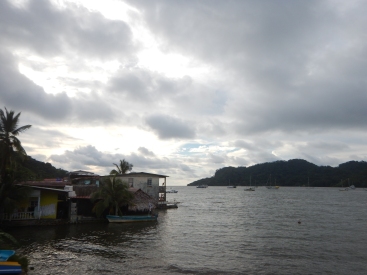 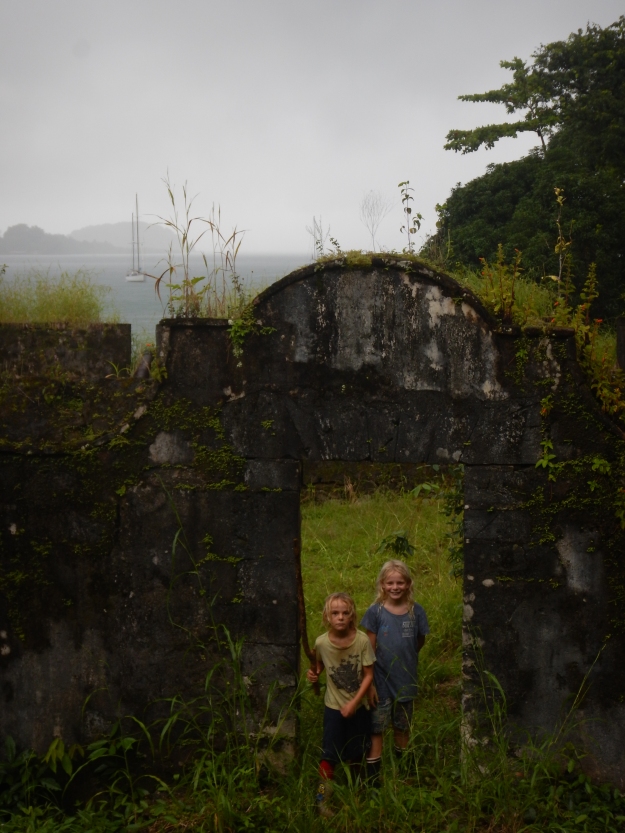 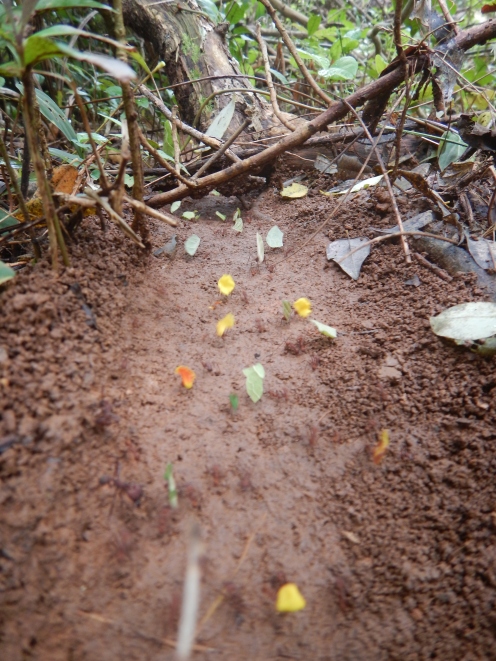 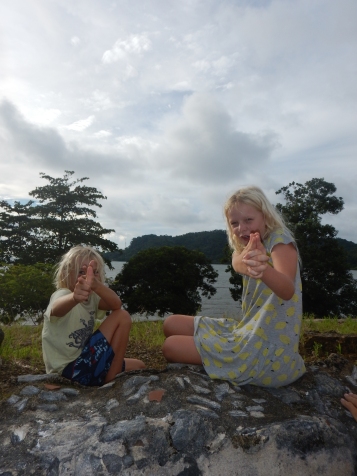 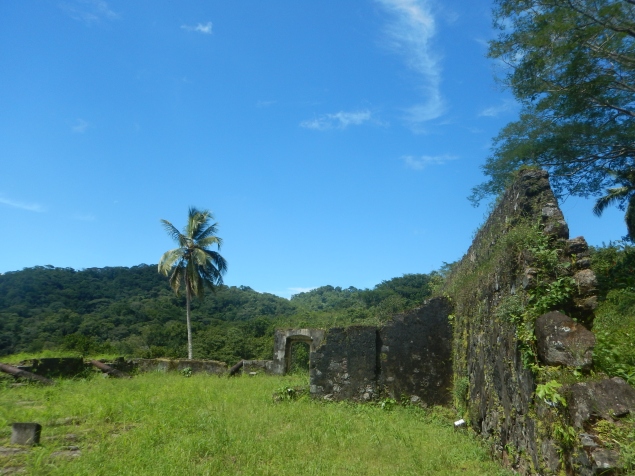 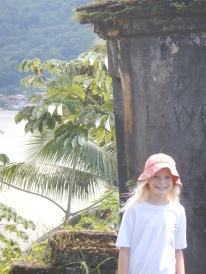 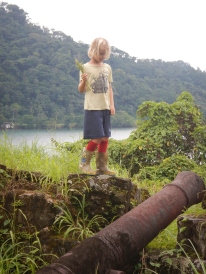 After our Christmas travels, we returned to Blue Zulu with double the luggage and were very lucky to find her safe and mostly mould free despite the wet humid weather! Then it was rather quickly on to the massive port of Colon which is the entry point for the Panama Canal. We thought we could save some money and decided to brave the anchorage in the very industrial Cristobal port. After an extremely noisy, dirty and rolly night we gave up on the ironically named ‘Flats’ anchorage and secured a berth in the much better named Shelter Bay Marina.

There is a certain procedure and a fair amount of paperwork involved to transit the Panama Canal. The majority of hand-line boats (as us small vessels are known since we are pulled through the canal locks by hand and not by trains like the commercial ships) employ the services of a local agent to navigate the process. But not us! Buoyed by stories from friends who had transited easily the year before, we decided to do it ourselves. Mostly this was a straightforward process – we got measured by a friendly Admeasurer (you pay by length); we paid the fee which you have to do in person, in cash, in Colon (reputed to be the most dangerous city in Panama!); and we called for our transit date – so far so good!

We then rushed about like mad things provisioning the boat for at least 8 months in the Pacific, where things are either hard to get or hugely expensive. We tried to buy spares for almost everything and complete our growing list of boat jobs! Thankfully we also found time to take a wonderful hike through the nearby jungle where we spotted spider monkeys, a sloth and an anteater, while enjoying the sounds of nearby (but frustratingly hidden) toucans and howler monkeys. The kids loved the marina pool, movie nights and especially performing at the weekly open mic night! And most importantly we also made lots of new friends headed in the same direction across the Pacific. 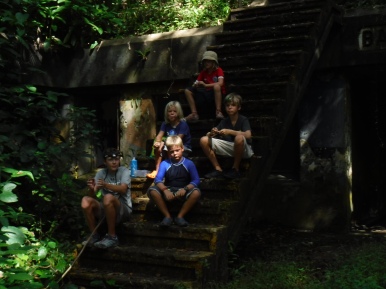 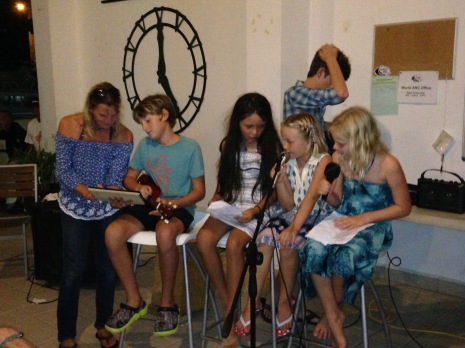 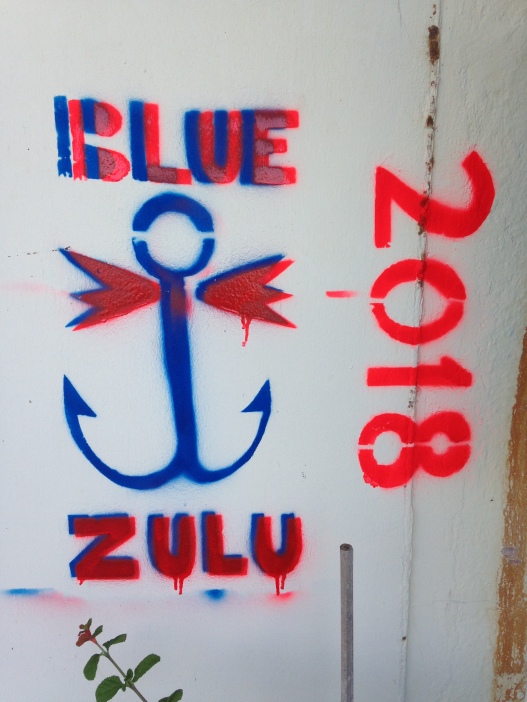 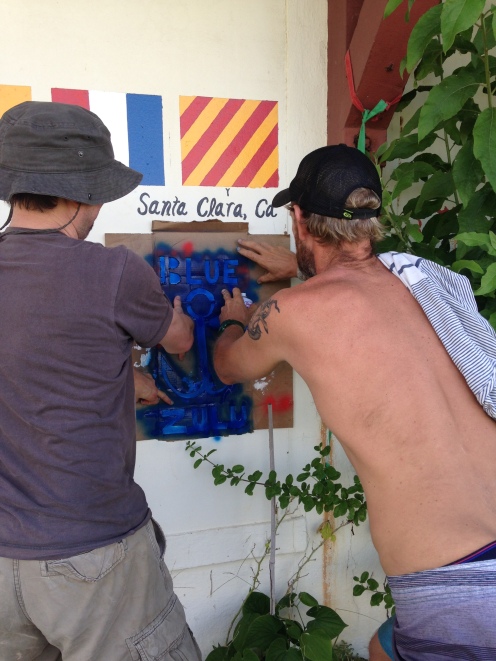 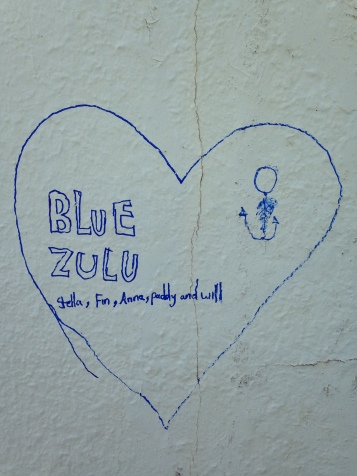 When yachts transit the Panama Canal, they need to have four line-handlers on board to catch, attach and control the long lines (ropes) that pull the boat through the locks in the canal. We had two special UK imports arriving to help us through the canal – ship nerds Will Hogg and Simon Hasslacher. Will, P’s cousin, had been promising to meet us in random places for over a year and finally came good on a four-day trip to Panama, and his good friend (who so kindly hosted us in Colombia) decided to jump onboard for the ride! So imagine our complete horror when our previously amazingly smooth Canal transit process went completely array and we got ‘bumped’ in favour of the World Arc rally who were transiting at the same time with 30 odd boats – ggrrrr!!!! Cruisers don’t generally love rallies – they dominate everything – marinas, anchorages and even canals it would seem! It looked highly likely that our special guests would miss this “once in a lifetime” experience.

I’m not sure how he managed it, but Patrick made friends with a canal advisor while helping a friend’s boat as a line-handler, and sweet talked him into getting us a slot. So insanely early on Tuesday 30th January, with absolutely no sleep and in the pitch dark, we made our way out of our cozy berth and into the chaos of Colon Port, dodging giant ships to once again anchor in the ‘Flats’ and await our advisor to take us through the Canal.

The Panama Canal operates 24 hours a day, 7 days a week, 365 days a year. It apparently employs around 10,000 people directly and another 10,000 indirectly. It is immense and impressive and steeped in history. You can’t fail to be impressed. The Canal was carved through one of the narrowest and lowest saddles of the long, mountainous isthmus that joins the North and South American Continents. From the Atlantic side there are three locks, collectively called the Gatun Locks. They are physically connected to each other and the vessel is raised 26 metres in three steps or chambers. Each chamber is 33.53 m wide (110 feet) and 304.8 metres (1000 feet) long. On the Pacific side there are three more locks called Pedro Miguel and Miraflores, which gently lower the vessel back down to sea level. In between the two sets of locks is the man-made Gatun Lake which covers an area of 423 square kms and is home to one of the world’s most diverse ecosystems.

All the small vessels that transit the Canal have an Advisor onboard rather than a Pilot who controls the huge commercial vessels. Advisors are Canal employees who work elsewhere on the Canal and volunteer their time to help small vessels transit the Canal. We stay in control of our vessel but the advisor helps and guides us through the process. We got lucky! Our advisor, Moses, was professional, polite, friendly, calm and extremely experienced.

In Gatun we had a centre chamber lockage which essentially means that we were held in the centre of the lock by four lines controlled by the line-landers — two bow and two stern. While in the last three locks we were ‘nested’ in between two other sailboats who then each controlled two lines each. Although easier for our line-handlers, the last part of the day was challenging for Patrick who as centre vessel had to control, manoeuvre and drive three boats instead of just ours into position.

We shared our locks with a huge Japanese car carrier – it’s rather terrifying watching the immense vessel pull up behind you! Thankfully it all went smoothly and as we entered the Pacific we are left with great memories of an exhilarating day! 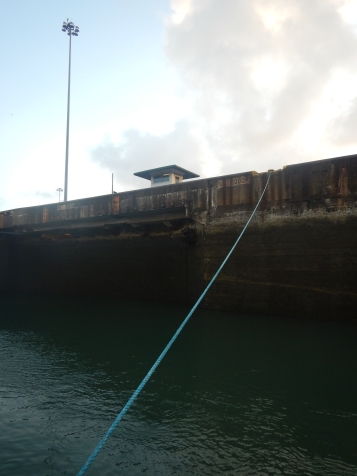 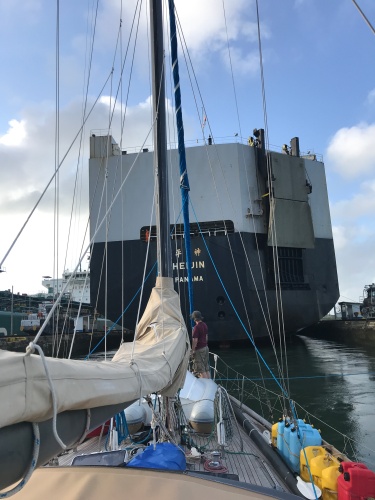 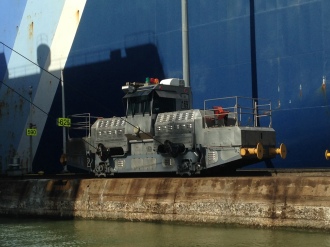 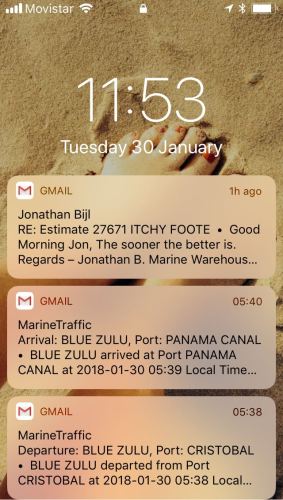 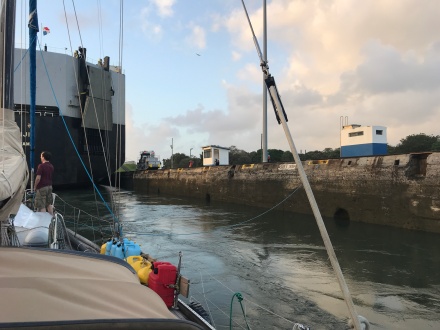 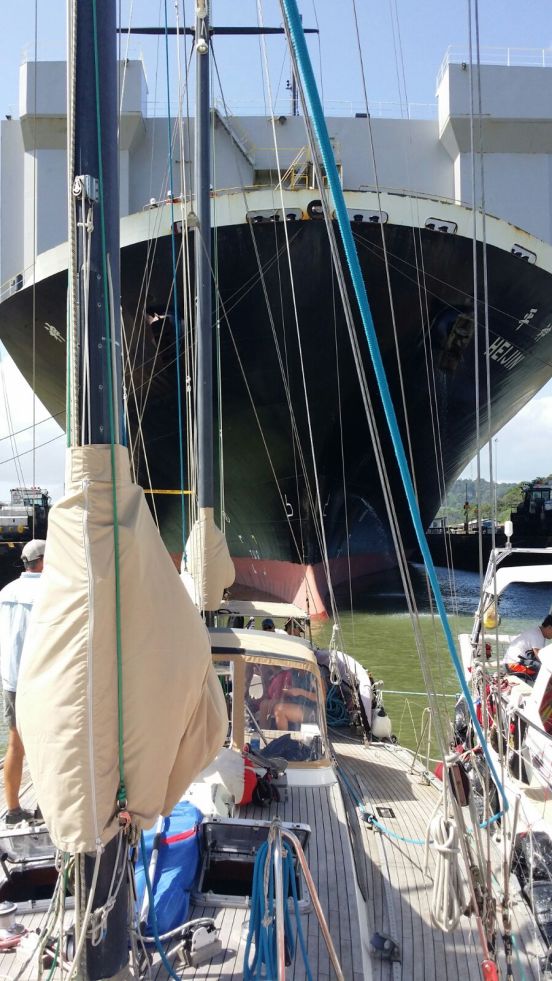 We then spent almost a month in Panama City, provisioning, fixing, waiting for a new passport and generally getting ready for our mammoth task ahead – the Pacific Ocean! We also visited a few of the great sights of Panama City namely the old town Casco Viejo, the incredible Frank Gehry designed Biomuseo, the Smithsonian centre and the really informative Miraflores Lock Museum. We also had a fun night dancing in the streets at the Panama Carnival!

But mostly we hung out with friends at the nearby Amador park or the skate ramp – Fin’s a new fan – and we took advantage of the incredible first world shops to fill Blue Zulu to bursting! We heard rumours of people struggling to leave PC and as with each new week, another of our boat systems seemed to break, we could identify with those boats and were thankfully to have a big city available for parts.

Panama City is hot, humid and a huge imposing city and the anchorages of the nearby Las Perlas Islands beckoned. The Perlas got their name when the Spanish conquistadores robbed a large amount of pearls from the indigenous King Toe. The 31 carat ‘Peregrina’ pearl of Queen Mary Tudor of England came from these islands. We had a magical week in the beautiful Perlas. We initially anchored between Mogo Mogo and Isla Chapera where the TV series ‘Survivor’ was once apparently filmed. Our frantic ‘city’ pace slowed back down to cruising mode – exploring islands, swimming, snorkelling, beach fires with friends – and we were reminded why we live the life we do. Our lovely Stella celebrated her 10th birthday while in the glorious Isla Espiritu Santo anchorage . She was delighted with her new adventure kit and Swiss army knife and enjoyed a magical party on a secret beach with the families from S/V Magic and Philocat Ena. We love cruiser birthday parties – presents are usually hand-made or found – in this case Stella received a fresh coconut, a handmade unicorn piñata and a wonderful sand-dollar mobile for her cabin. The kids played beach games, ate cake and even watched a film together all in this stunning place – a great way to turn 10! 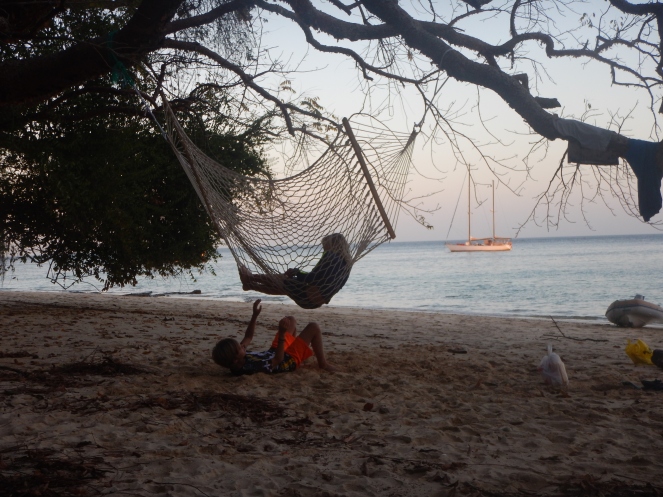 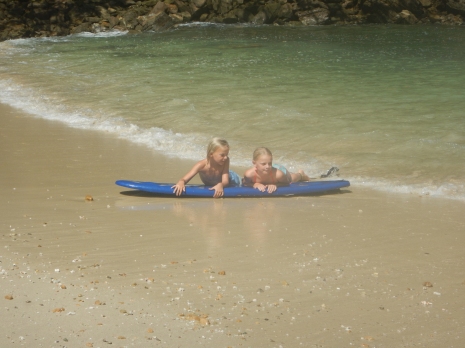 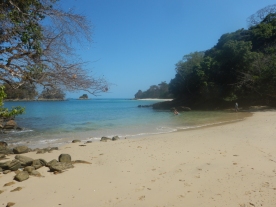 Patrick’s sister Lot, has now joined us in Panama for our sail and visit to the Galapagos. We visited the vast local fruit and vegetable market and are laden with delicious goodies for our trip. We have filled every conceivable space with a spare part, provision or bottle of wine. We have at least a ton of water and another ton of diesel on board – I think we are ready.

This passage can be notoriously windless – in a straight line it’s about 800 nautical miles but it crosses the Intertropical Convergence Zone (ITCZ) also known as the Doldrums – so we could sit for a while without any wind! We will also cross the Equator and hopefully Neptune will accept us and then the wonderful world of the Galapagos will welcome us. So next time we ’speak’ it’ll be from there. It’s so exciting! 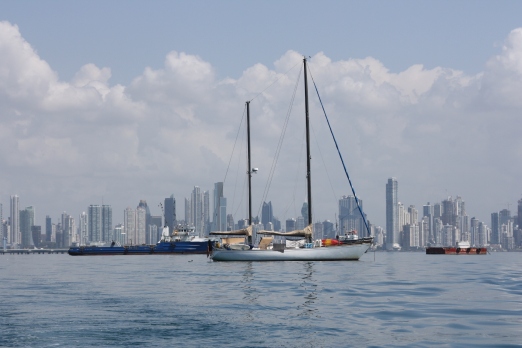 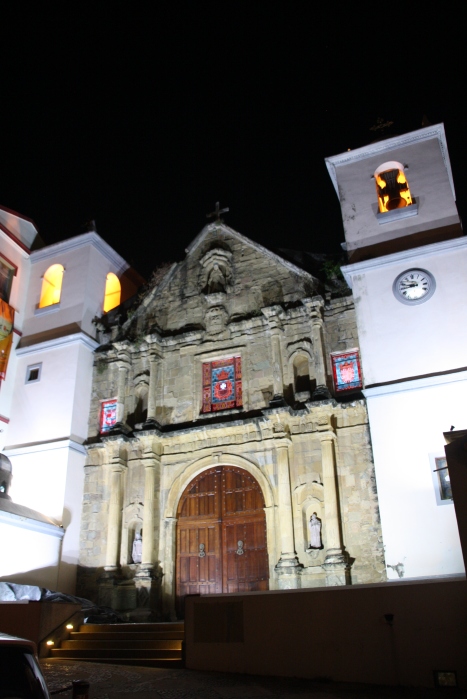 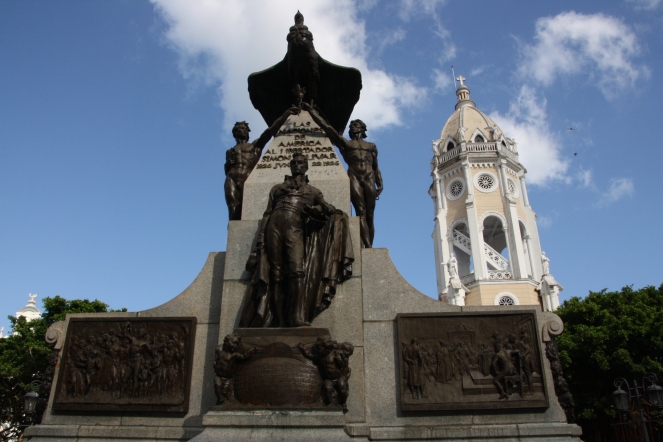 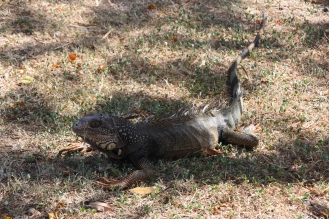 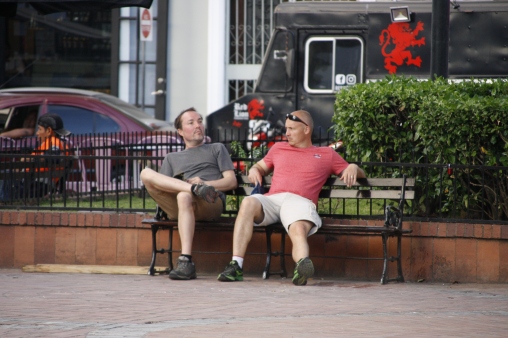 Fin: visit the great skate ramp and cooling foundations on the causeway near the Las Brisas anchorage.
Stella: walk around the Parque Nationale Metropolitano – nature in the middle of the city!