Grenada is apparently the smallest independent country in the Western Hemisphere. Reportedly named by Spanish sailors because they likened its green hills to those above Granada in Spain’s Andalusia. In the Caribbean you usually get islands with fabulous beaches or gorgeous tropical interiors but Grenada has both. Known as the Spice Isle, you can actually smell it from the water as you sail down the coast.

The hills of the lovely capital St George’s are covered in gorgeous red flame trees known as Flamboyance. Then suddenly as you drive out from the bustling city, you’re in tropical forest, broken here and there by cultivated areas where there are coffee bushes, nutmeg and cinnamon trees.

Although the island gained independence from Britain in 1974, it is still quite British in many ways, you can even find Waitrose and Tesco products on the supermarket shelves and sometimes for even less than the local equivalent – bizarre!!

The southern anchorages in Grenada sit around 12 degrees which is theoretically out of the track of the majority of hurricanes so cruising boats traditionally flood into Grenada – it’s even known as Camp Grenada! There is a daily VHF radio net which informs all cruisers of everything from the weather and local business to ‘treasures of the bilge’ and social events. And social events there are plenty of – Mexican train domino competitions, volleyball, jam sessions at the Brewery, yoga at the Tiki bar and cooking demonstrations at True Blue are just some of the things on offer. But the obvious draw of Grenada for us – lots of kids boats!

We spent about a month in Grenada and so got relatively used to the local buses – jam-packed, frequent and pumping very loud local soca music. We soon realised that the volume of the music could often be a fair indicator of the speed of the driving – ‘just close your eyes’ was sometimes the only way!

But generally life in Grenada was fairly easy – good grocery stores, lots of friendly boats around, laundry facilities near by and lots of things to keep us busy. We anchored in four different anchorages: Hog Island, Mount Hartman Bay, Prickly Bay and St George’s – each has a different feel and distinct advantages which made moving around fun and kept our month in Grenada interesting. We even had a night in Secret Harbour Marina thanks to Tropical Storm Don that never really materialised but we really enjoyed the marina pool and hot showers anyway!

Hash House Harriers are a worldwide running group who claim to be a ‘drinking group with a running programme’; a slogan I should have paid more attention to when I took Stella on one of their hikes. Grenada has a very active group who organise weekly hashes with both running and walking trails complete with pumping local music, a bbq and plenty of beer! A hash is essentially a route with many variations and false trails. When you get to a circle of paper on the ground you have to decide which way to go by asking ‘Are you?’ to those who have gone before you – answers include ‘checking’ (checking it’s the right route), ’on-on’ (keep going) or ‘on back’ (wrong path). We both loved the hike through the jungle with Stella enthusiastically shouting out all the answers to the questions. It was travelling home for an hour in a packed minibus covered in beer after the initiation ceremony that I didn’t really enjoy. 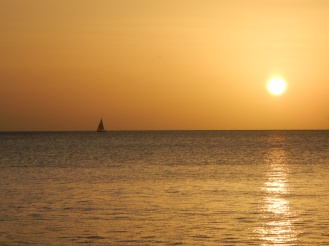 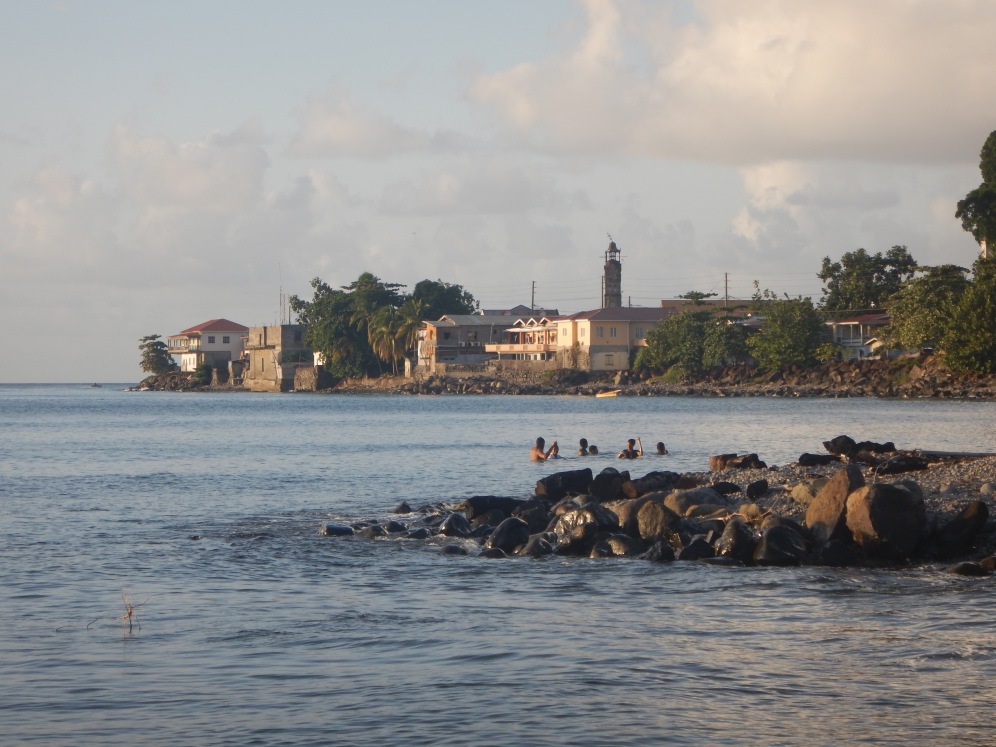 A rather famous name among the Grenada cruisers and especially those that listen to the morning ‘net’ is Shademan – a local guy with a minibus taxi who organises a large array of gatherings. We joined his merry band for a fabulous visit to the Commancheros steel pan and mas camp to see them practising for Carnival. We heard the 70+ strong steel pan drum orchestra practising for Panorama and saw the ladies making the 500+ costumes for mas. Steel pan drums originated in Trinidad and were originally made from the steel oil drums used in the islands. I was blown away at the variety of sounds these instruments can produce. It was amazing to see the beautiful, intricately made costumes – millions of feathers and sequins on hundreds of costumes. Carnival is big in Grenada so it was fun to get a little glimpse behind the scenes and learn a little bit more about the traditions. We also met the lovely German families off the boats Beluga and 7 seas at this event and have remained firm friends.

Stella and I joined our friends from Maple to attend Children’s Carnival in the main stadium – a true riot of music and colourful costumes – we loved seeing the Commancheros strutting their stuff on the stage and hearing the music live that they were practising when we visited their practise sessions. We left the stadium with the music ringing in our ears – the Grenadian’s sure like to make everything very loud! 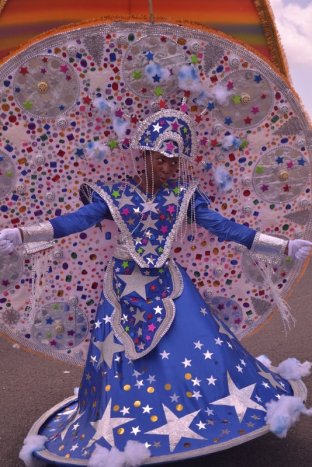 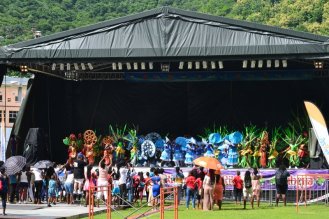 Stella and Fin also attended an Optimist sailing camp at Grenada Sailing Club. In true Caribbean style it was two weeks of total chaos – twenty-five kids from seven different countries with initially only 3 boats and one local instructor, Randy. The parents soon joined in to help with the camp and the kids managed to learn the sailing basics. Mostly though I think it was a wonderful excuse for a bunch of wild boat kids to run free together for a couple of weeks with minimal supervision and for their parents to enjoy a bit of a break from boat school! 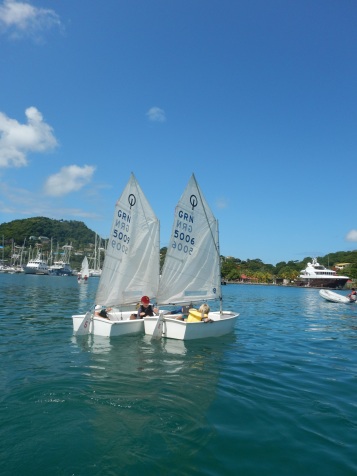 A bit earlier than we would have liked, Blue Zulu decided it was time for her annual haul out by leaking water into both the bow thruster and the sail-drive gearbox. So we hauled out in Spice Island Marine Services in Prickly Bay, Grenada. Having your home plucked out of the water by a crane and driven across the yard to be propped up on the ground is a very nerve-wracking experience – thankfully everything went well. Being out of the water and in a boat yard is generally known as being on the ‘hard’ – a refection of what it’s like living on a boat on land but fortunately we lived in relative luxury this time as we rented an air-conditioned room in the yard – total bliss. Jobs completed included cleaning fuel and fuel tanks, new anti-foul, new plumbing pipe, bow thruster removed and sealed up, sail-drive serviced and seals and bearings replaced. 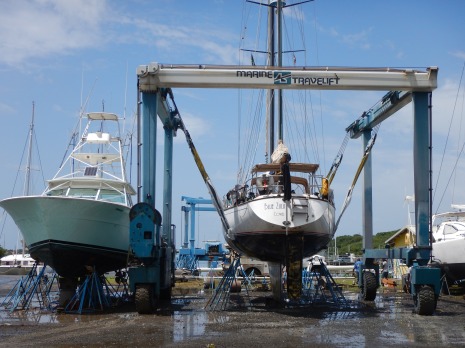 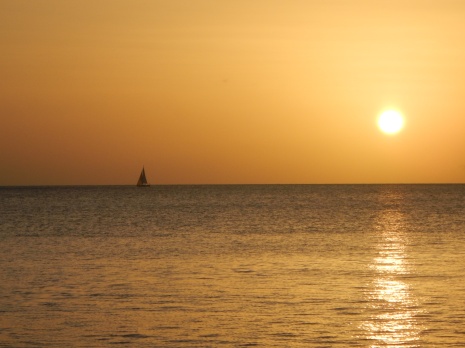 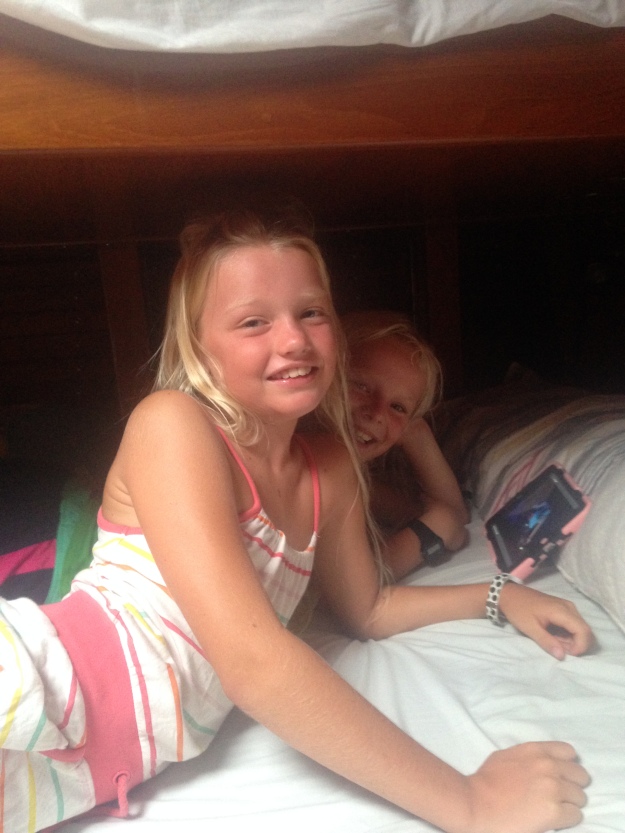 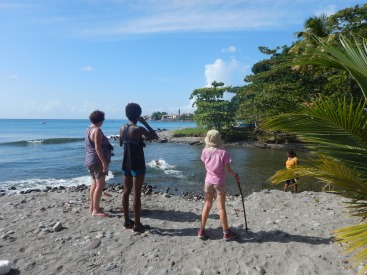 * Special thank you to our lovely friends on sailing yacht Maple for sharing their Carnival photos with us.

2 thoughts on “Grooving in Grenada”